Québec, November 22, 2019 – The Fondation de la faune du Québec is pleased to have contributed to the completion of a project to restore arctic char spawning grounds at the outlet of Lake Bérard in Nunavik through its program, Amélioration de la qualité des habitats aquatiques (AQHA – aquatic habitat quality enhancement). The work was carried out by the Hunters, Fishermen and Trappers Association of Tasiujaq. The purpose of the project was to improve access to spawning grounds downstream of Lake Bérard, formerly widely used by anadromus arctic char stock.

Note that the Lake Bérard system is a wintering and breeding site of great value to the arctic char in the region. Currently, several thousand fish travel up the river to spawn and winter in the calm waters of the lake. However, for the past decade or so, local fishermen have noticed a significant decrease in the flow of water in the spawning grounds. Since  arctic char is the main source of local subsistence for the community of Tasiujaq, the inhabitants were greatly concerned by the situation.

“This project to restore spawning grounds of arctic char is a fine example of the type of project financed by the AQHA program. Users within the territory had remarked that what was formerly a river with a flow of several cubic metres per second had become a dry riverbed. With only slow-moving water at its centre, water flowed between the rocks without offering the fish sufficient depth to spawn and the eggs to survive during winter,” indicated Amélie Collard, Program Manager with the Fondation de la faune du Québec.

To solve the problem, the Hunters, Fishermen and Trappers Association of Tasiujaq completed work that consisted of slightly deepening the natural threshold that controls the flow of water from the lake. In order not to interfere with the fish’s migration and spawning, the work was carried out before the species’ migration period, which usually begins in the month of August. “The work that we carried out re-established the hydrological conditions prevailing in the spawning grounds a decade earlier and will encourage the arctic char to travel up the river and spawn,” indicated Billy Daniel May, President of the Hunters, Fishermen and Trappers Association of Tasiujaq.

From an environmental standpoint, care was taken during the work to mitigate any impacts on the aquatic and riparian ecosystems. Flow rates from the lake as a whole remain unchanged.

The mission of the Fondation de la faune du Québec is to promote conservation and contribute to enhancing wildlife and wildlife habitat. Since 1987, and thanks to contributions made by more than one million hunters, fishers and trappers in Quebec, thousands of donors and a significant number of private corporations, the Foundation has been able to provide support to more than 2000 organizations across Quebec and establish a true wildlife movement. 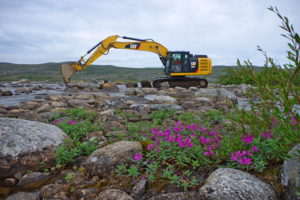